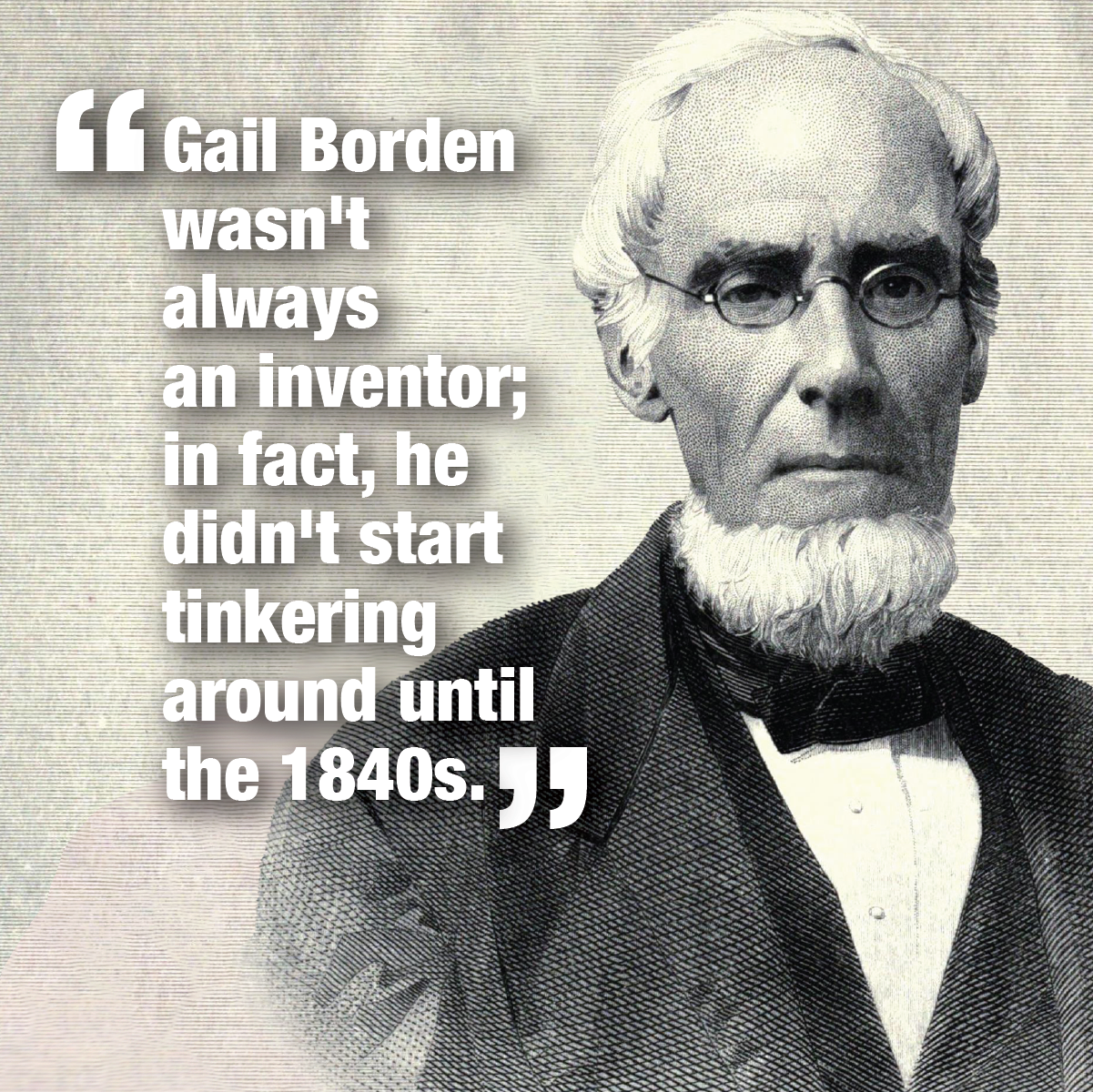 Have you ever wondered what it's like to fail in life? Well, Gail Borden, a Texas inventor, didn't have to wonder. His life was filled with failure. In fact, Borden’s list of misses is fairly long. The amphibious boat and the meat biscuit take top honors. But there's one thing that separated him from everyone else: his ability to not give up. He always pushed forward and never looked back.

Gail Borden wasn't always an inventor; in fact, he didn't start tinkering around until the 1840s. Like many people in Texas, he was an immigrant. Born in New York in 1801, the young man moved west with his family when he was 12, finally settling in Indiana. Next, Borden moved to Mississippi in his late twenties. After teaching school there, he headed to Mexican Texas in 1829 to join his brother, Thomas, who was one of Stephen F. Austin’s “Old 300” colonists.

Borden, like so many American immigrants to Texas at the time, tried his hand at making money any way he could. He raised cattle on a ranch in Fort Bend County, then became the official land surveyor for newcomers coming to the region. Troubles with Mexico led to the Texas Revolution, and Borden was embroiled in that conflict. He and several partners started a newspaper The Telegraph and Texas Register to spur on the cause of Texas independence.

After Texas achieved that goal, Borden sold his share in the newspaper, and took a government job—collecting taxes in Galveston. He also helped develop that city by selling lots for new houses and encouraging people to move to the coastal island. Eventually, becoming a large landowner, it wasn’t until Borden was in his forties that he got serious about his inventions.

Living on the coast, he worked on an idea of a seaworthy, wind-driven wagon that would make navigating that stretch of the state easier. Simply unhitch the team of horses, remove the wagon tongue, and cross a river or head out to sea. Well, it sounded better than it turned out to be. On the first trial, the wagon proved unstable in the wind and surf and capsized.

The frontier nature of Texas spurred Borden to think in other ways, too. What about a thick cracker of dehydrated meat mixed with flour to make a portable food that wouldn’t spoil? Another famous Texan, Dr. Ashbel Smith, an official of the Republic of Texas and first president of the Board of Regents of the University of Texas, loved the idea and partnered with Borden on the meat biscuit idea, but it met with little success in Texas.

Undaunted, Borden moved to New York City in an attempt to sell his meat biscuits. The product was a gold medal winner in a contest in London, and the U. S. Army tried them out as rations for soldiers on the frontier. Everyone loved the idea of meat biscuits . . . but no one loved the way they tasted or looked. Borden had sold most of his land to finance his inventions, and slowly went broke. In 1855 he ran out of money and gave up.

But not for long. Borden began thinking about milk. While still trying to sell his meat biscuit idea, he had also experimented with preserving milk, which in the time before refrigerators, often spoiled in a few days. The resourceful inventor figured out how to evaporate and condense milk, then store it in cans, so that the product could stay on the shelf for a long time.

This genius idea attracted people willing to give Bordon money to build a factory in northwest Connecticut, but consumers still didn’t react the same way. The idea threatened to curdle, until the American Civil War.

Union soldiers could not get enough of the stuff. Pretty soon, Borden had factories in Connecticut, New York, and Illinois. He also invented ways to preserve and can fruit juice, coffee, and meat broth. By the time the war was over, Borden was rich.

In his later years, he traveled between New York where he spent the summers, and Texas where he wintered, since where most of his family still lived there.  In the Lone Star State, Borden built a meat packing plant close to Bastrop and a sawmill and copper cookware company in Bordenville, a town he founded near Columbus. Borden also used his wealth to help educate African American Texans, who were emerging from the dark days of slavery, and supported efforts of the Baptist church.

Borden died on January 11, 1874, having lived an amazing life. In 1876, the State of Texas named Borden County in his honor. In 1891, settlers to that rural county founded the town of Gail to serve as the center of government, an homage to the inventor of the amphibious wagon, the meat biscuit, and condensed milk.