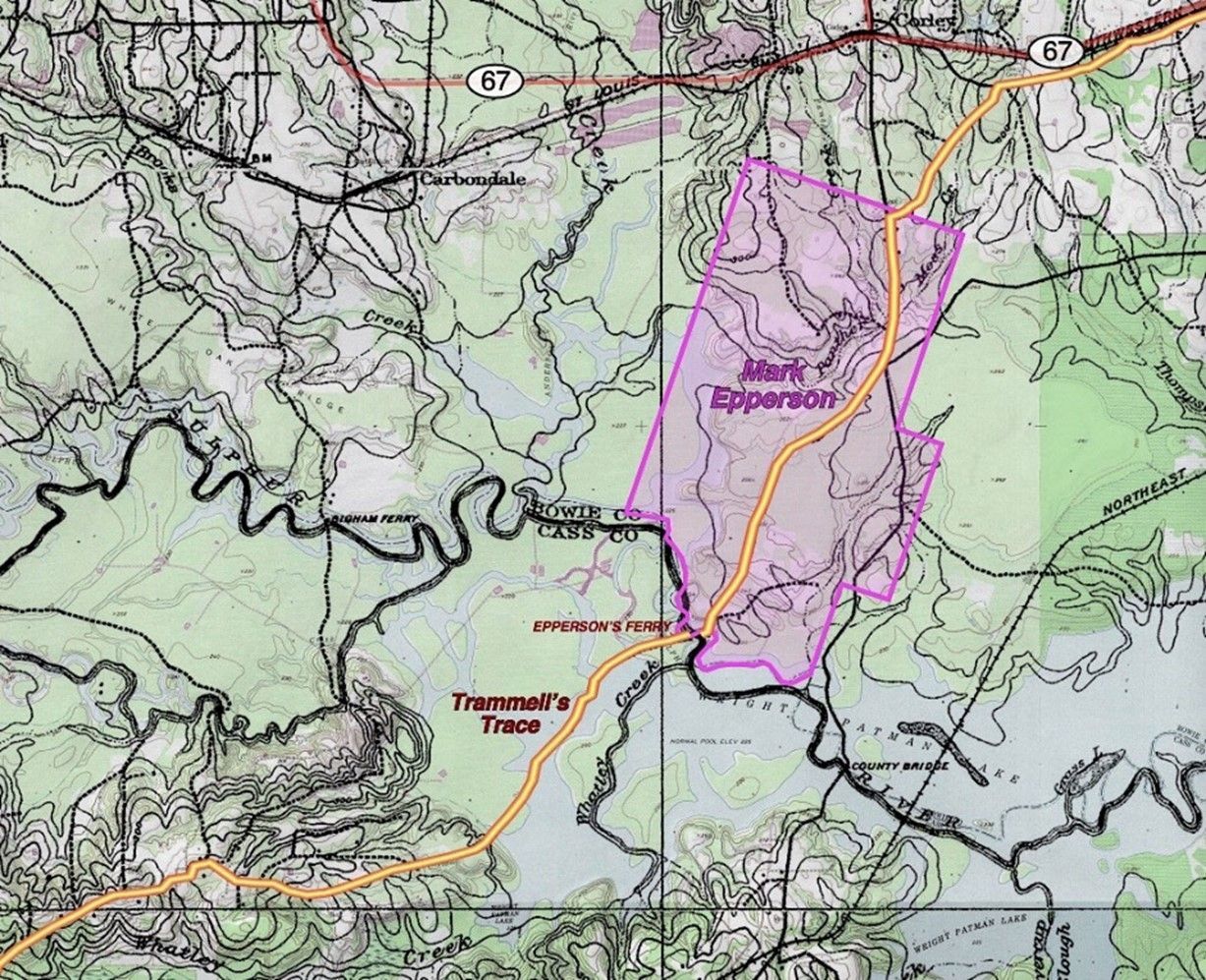 After an adventurous life across the Tennessee frontier, including serving in the War of 1812, 39-year-old Mark Epperson prepared to lead his most daring migration. He chose sparsely settled northeast Mexican Texas, which had familiar terrain and required similar life skills.

On November 10, 1834, Mark reached Texas, settling his family of six on the Sulphur Fork of Red River, along the northern fringe of the Texas Cherokees—a people with which his affinity ran deep through the love and influence of his mother, believed to have been Cherokee by blood. Evidence points to Mark having spoken fluent Cherokee as well as English.

A FERRYMAN ON THE NORTHEAST MEXICAN FRONTIER

Having previously lived and worked around prosperous Tennessee ferrymen, Mark brought with him to Texas knowledge of how to move cargo across water. Within about 18 months of arrival, he’d built the first ferry installations between Arkansas Territory and Big Cypress, at the crossing of Trammel’s Trace and Sulphur Fork. Trammel’s Trace being the principal land route into Texas via Arkansas, Mark chose his location well. On the high ground above the ferry, just downstream from Panther Creek, he built necessary outbuildings and a log home for his family. In this wilderness, such speedy construction progress required help from an available labor source—possibly Cherokees.

Epperson’s Ferry likely employed a horizontal treadwheel boat, possibly with guide cables stretching point-to-point. Given the broad meandering slough on the right bank, mechanical propulsion other than mere hand cables was doubtless necessary. Positioning the horizontal wheel below deck and cutting a circular opening just large enough for the horses, mules, or oxen increased cargo space and simplified the design to a single-hull boat.

By 1836, the new Texas Constitution entitled heads of families resident prior to Texas’ Declaration of Independence to a league (4,428 acres) and labor (177 acres) of land from the public domain. This quantity of land was two orders of magnitude greater than what Mark had acquired in Tennessee.

The First Congress of the Republic adopted various internal transportation statutes, mostly favorable to Mark’s situation. The acts exempted ferrymen from militia service, authorized county courts to establish and regulate ferries, and made Epperson’s Ferry a regional hub for bi-weekly postal delivery. The ferry was also a distribution point for Texas’ principal publication, the Telegraph & Texas Register. Ferrymen paid the county a licensing fee, which in Cass County ranged from $1.50/year in the 1840s to $10/year in the 1880s.

Introduced by House member Collin McKinney, the petition arrived too late to make it through committee, but Mark later acquired a 10-acre south landing.

Several years were required to secure a land title, and Mark continued living on his much-improved tract, operating the ferry, and waiting for his land title. Texas’ first land certificates were issued in 1838, and Mark received #68 of 347 First Class Certificates issued by the Red River Land Board.

Though surveyors were then in great demand, Mark arranged for speedy surveying of his ferry tract of 2,459.72 acres (March 31, 1838). His second survey of 2,145.78 acres, located just west of present-day Texarkana and likewise bisected by Trammel’s Trace, followed (April 15, 1838).

Both tracts were duly patented, although the ferry tract patent was delayed by a boundary conflict with Charles Collom, assignee of A. Melton. Mark’s survey prevailed.

Shortly before Mark secured his 1846 patent on the coveted ferry tract, the Mexican-American War began. That September, a “Regiment of 1,000 Tennessee Volunteers” reached Bowie County. The Standard reported, “William N. Porter, formerly representative in Congress from this County, commanded the Company. They spent two nights – the second at Epperson’s Ferry. New corn was furnished at 50 cts/bushel, and fodder at $1/hundred bundles which cost them for the two nights $450. Expense of beef &c not known.” Traffic at the ferry brought many opportunities for social engagement and profit.

In early 1848, a plan to “run the steamer BELL OF ILLINOIS on the Sulphur as high up as Moore’s Landing” was advertised, offering “6c per pound for sound dry hides, 9c for good peltries, and $1 each for heavy coated bearskins along this route.” That Landing being a short distance downriver, Mark had the opportunity to warehouse pelts as well as crops with a potential future of expanded steamboat traffic.

A state RIVER BILL for navigational improvements lifted the excitement further, and the press reported, “Up to the junction of White Oak (upriver from Epperson’s), Sulphur is a better stream than the main Red; has a deeper bed, a straighter course, free of bars because the banks do not wash, and has water in it for a longer period, and the current being slower is not liable to such rapid changes from high water to low.”

Meanwhile, in September 1850, the U.S. Scrip Warrant Act granted Mark (for his War of 1812 service) 80 acres of Iowa land, the prompt sale of which provided extra capital for future ferry improvements.

In 1852 and 1856 by renewal, Mark chartered the SULPHUR FORK TURNPIKE COMPANY to “construct a good and substantial turnpike across the low-lands on Sulphur Fork, at Epperson’s Ferry, from the high-land in the county of Cass, with bridges across sloughs, the whole to be above ordinary overflow, with the privilege of keeping a ferryboat in or constructing a bridge across the main stream; provided said bridge shall be sufficiently high to admit free passage of steamboats.”

Given contemporary roadbuilding methods and Mark’s own vast hardwood stands, it is assumed that this was to be a plank road. Soon, contracts were let “for cleaning out Sulphur Fork to Epperson’s Ferry” and to “ensure 80 feet clear stream the whole distance.” The work anticipated arrival of the first shallow draft steamer Julia, built 1854, from Shreveport to Epperson’s Ferry. The Julia initially took out 353 bales of cotton, and the press reported, “The arrival, besides giving great satisfaction to dwellers on the river, repaid them for their labor and expense in removing stumps and improving its banks.” For a time, little Julia continued to ply between Shreveport, Epperson’s Ferry, and other tributaries.

Mark’s turnpike might have facilitated an inland port at the ferry, giving farmers a far more convenient shipping option than the long road to Jefferson. However, an era of road and railroad building ensued, and Sulphur Fork never saw regular steamboat navigation above Shreveport. Mark’s charter expired in 1860.

WHATEVER COMES, HOLD THE LAND

After 1860, prosperity slowed. Based on a dollar that had lost 40 percent of its value since 1850, Cass County set new ferriage rates, with ferriage for a four-horse wagon being less than half of the 1848 rate.

In 1868, 72-year-old Mark signed an affectionately worded Gift Deed conveying 54 head of livestock to his married eighth daughter, Susan Malinda.  He died in October 1869 in possession of his entire Texas headright and was likely buried near the historic ferry. In her 1872 petition to divide his “two tracts of land of one half league and labor each,” widow Margaret reserved to herself “the Epperson Ferry tract,” which she sold in 1875 to neighbor F. M. Watson, who already held a partial interest.

As part of Texas’ 1936 Centennial celebrations, a state historical marker was erected at the ferry site. When the impoundment of water behind Texarkana Dam began in 1956, the marker was moved beside Highway 67, east of Maud.

Today, roads to the ferry site are no longer maintained, but the depression in the land surface that defines the old Trammel’s Trace endures through what is now Corps of Engineers property.