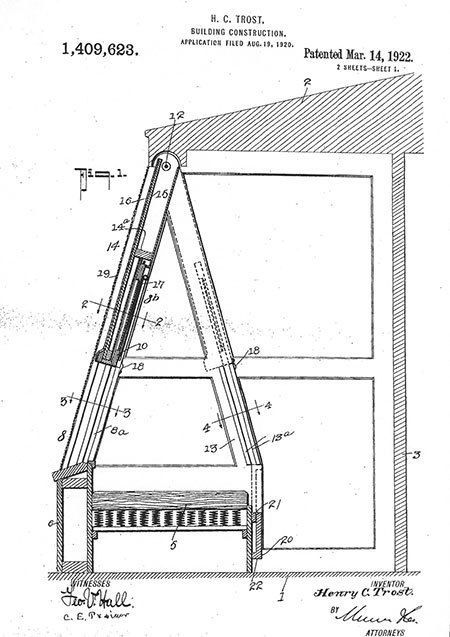 Though known for his building designs, Henry Trost was also an inventor. One of his more interesting ideas—the outside/inside bed—was touted in Southern Architect and Building News April 1922 issue as a “unique and one of the most remarkable achievements.” The architect’s self-described sleeping porch compartment had an oversized window contained within a specially constructed, A-shaped frame with arms attached to both ends of the bed. According to the article, once settled under the covers, the pivoting design allowed the occupant to “lift and shift the window from the outside [headboard] of the bed, up, and…over…and then [close] down on the inside [footboard]” and slumber in the open air. The swinging mechanism even had a steel mesh screen incorporated into the frame to keep the bugs away and blinds for privacy.

In an era when tuberculosis was rampant, Southern Architect also noted that “The increasing popularity of outdoor sleeping is neither fad or fancy. It is based on the soundest principles of hygiene.” According to the author, the potential use of the outside/inside bed would “revolutionize…hospital and sanitorium construction.” Hotels could install a series of sleeping compartments along covered porches or balconies, creating extra spaces for guests without having to add on to the building. However, whether Trost’s invention moved beyond a rendering on paper remains unknown.

In 1925, the architect patented his “valet-service wardrobe for hotel doors,” an innovative amenity—and one successfully installed in guest rooms at a Trost & Trost El Paso hotel. The SerVent door allowed a guest to hang clothes in need of cleaning within a built-in door compartment that hotel staff then collected from the hall-facing side using a locked and hinged panel. Trost added one more modification—a special feature that could be adjusted and used as a ventilator for the room. The cleverly integrated air flow component of the design essentially eliminated the need for installing a transom above the door, which in turn, lowered the required ceiling height—saving space that could be used to add more floors when building a high-rise hotel.