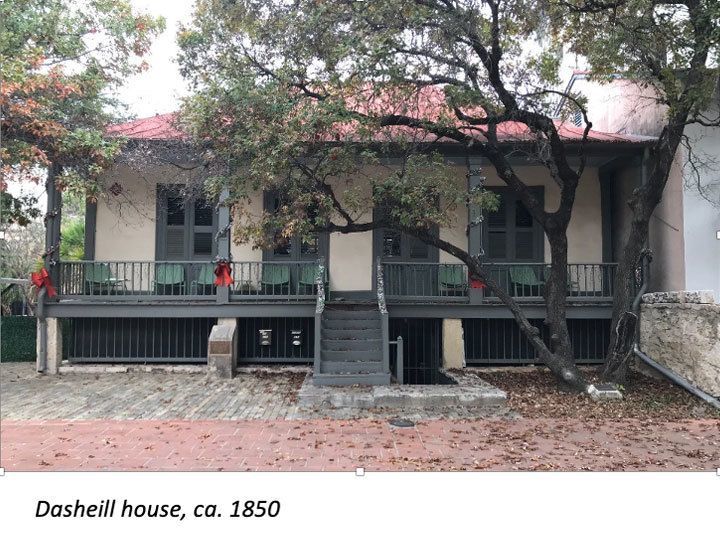 While La Villita is often described as San Antonio’s first neighborhood, it is more appropriately described as San Antonio’s first suburb.  The Presidio de Bejar was located on what is now Military Plaza in 1719.  The soldiers’ families gathered closely around the presidio in meager shelters.  The Villa de San Fernando was established immediately to the east of the presidio in 1731.  The villa was organized around a plaza with parcels of land around it given to the Canary Island settlers.  This area around the presidio and the plaza of the Canary Islanders, became San Antonio’s first neighborhood.  The Mission San Antonio de Valero was about a half-mile to the east and across the river.  The mission was a separate entity established by the Franciscan friars to missionize the Native American clans in the area and was purposefully independent of the villa.

The name La Villita refers to the little town, separate from the villa and across the river to the southeast.  Therefore, it was subordinated from the Villa de San Fernando.  While the Villita area may have been home to some individuals in the 18th century, its permanent settlement dates to the early 19th century when the Spanish government established a garrison there and granted parcels of land to civilians along newly established streets.

La Villita saw its first revival (or was it a gentrification?) in the 1850s. A sense of security had returned to the town with the arrival of the U. S. military and the establishment of a quartermaster’s depot at the site of the Battle of the Alamo. Enterprising citizens from Europe and southern and eastern states began arriving in San Antonio in an attempt to be on the cutting edge (and the profitable side) of the “destined” expansion of the United States.

Some of these immigrants began to acquire property in La Villita. John W. Smith moved to San Antonio in 1827 and married Maria Jesusa Delgado Curbelo, a descendant of two prominent San Antonio families, the Delgado and the Curbelo clans. Smith purchased a lot in La Villita from his wife’s aunt, Encarnacion Delgado in 1835. Smith, known as the last messenger to leave the Alamo, fought at San Jacinto, and was the first mayor of San Antonio after the Texas Revolution.1

In the 1850s the properties in La Villita began to change hands more rapidly. Joseph H. Beck purchased lots after they were lost through tax forfeiture. He owned the properties for a short time before they were sold to other non-Hispanic buyers. S. W. and Mary Mc Allister bought property, built their house and store, and subdivided their land into other plots for the purpose of resale.

A group of French Americans purchased property on Villita Street.  P. L. Buquor secured a stretch of land between the river’s edge and Villita Street, which was at that time, the main road leading from the lower missions on the east bank of the river into San Antonio. The road forded the river below the dam (presa) that diverted water into the irrigation ditch serving Mission Concepcion.

Francois Guilbeau, Jr., a French consul, bought a piece of Buquor’s land in 1853 and lived there.  Guilbeau was one of those who helped save the French wine industry from the scourge of Phylloxera, a plant louse.  (See Texas Heritage, Volume 3 2021.) Later the house was sold to Marie Beincourt who lived overlooking the bend in the river for 52 years.

The most strikingly French-American house in La Villita is that of Jeremiah Y. Dasheill. It too was built on the high riverbank on the north side of Villita Street. The structure is a raised cottage, meaning it has a half basement. Because of its position on a sloped riverbank, the basement is a full story on the river side. The upper floors were to be used by the family for formal rooms, and the kitchen and storerooms were on the lower floor. The plan of the house is a Creole cottage common in New Orleans and modified by San Antonio builders. The house has four sets of French doors across the south front, each outfitted with shutters, and the doors are protected by a generous porch. 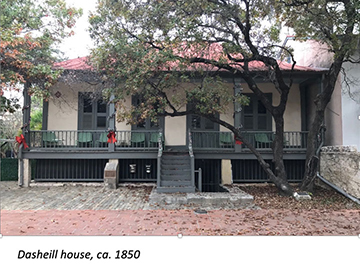 The Esquida-Downs-Dietrich house tells the history of La Villita through its early ownerships. The property was a grant from the Mexican government to Eduardo Hernandez in 1831. Justo Esquida became the owner in 1839 and is thought to have built the residence. He sold the property to James M. Downs in 1846, and four years later transferred it to Marie A. J. Dietrich, a German immigrant. Each sale represented a different nationality of settlers in La Villita. 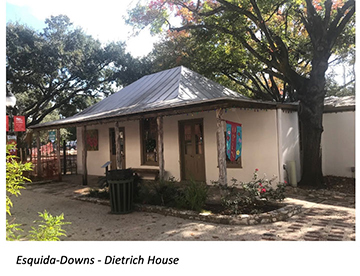 Other German Americans found La Villita an attractive place in which to live and invest in real estate, buying properties that had been owned by Hispanic families. Ernest Hessler purchased several parcels along Presa Street. He first built a three-room caliche block house in 1869, with one room across the front and two behind. 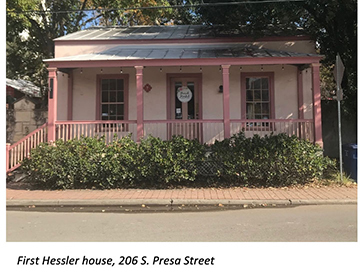 The second Hessler house was built before 1874 and is a four-room structure with two rooms at the front and two at the rear. Each has a simple hipped-roof porch with columns that reflect the classicism of the earlier Greek Revival style. The simple pillars were decorated with moldings to represent the capitals, shafts, and bases of a classical column. 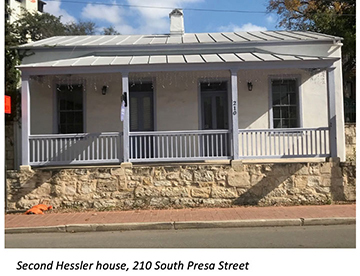 Ernest Dosch and Ulrich Rische, proprietors of the Deer Horn Saloon built a residence for rental investment in the early 1880s.  It is an example of a small caliche block house with a central hallway and a room on either side. Its front porch exemplifies the type of house being built then in San Antonio, as the German-American community gained wealth and the economic prominence. 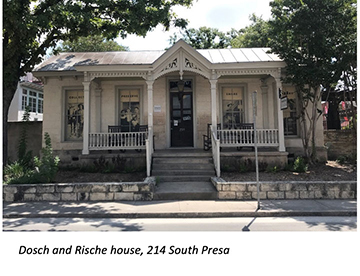 In the late 19th century, La Villita along South Alamo Street, changed as houses were torn down and replaced with large commercial buildings.

The cluster of buildings still known as La Villita became dilapidated in the 20th century. However, San Antonio Mayor Maury Maverick, Sr., who served from 1939-1941 and was a congressman before that, knew President Franklin Roosevelt. He was able to use that influence to help secure federal funds to renovate the first seven structures in the historic neighborhood and build a library and a plaza for community events.  The City of San Antonio purchased other buildings in the three adjacent blocks during the next 30-plus years, creating the important historic district that La Villita is today.

Author’s note: Thanks are extended to Maria Watson Pfeiffer for the use of her historical research, which was provided to Fisher Heck, Inc., Architects to develop a series of interpretive markers for the buildings of La Villita. This project was sponsored by the City of San Antonio in its ongoing commitment to preserve La Villita.