Old and New Come Together Seamlessly at the Brenham Heritage Museum 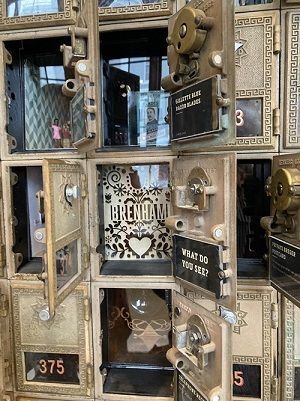 Even though the building is listed on the National Register of Historic Places, I was surprised a couple weeks ago when I walked into Brenham’s 1915 decommissioned post office, now home to the Brenham Heritage Museum (BHM). What I expected was something more “rustic” and less impressive than the stately single-story Classic Revival brick structure, which was still being readied for the museum’s grand opening set for this Thursday, November 17 at 1:00 p.m.

On that day, BHM Executive Director Mike Vance and I initially talked about the impressive details of the old post office, including the tall wooden windows, decorative transoms, and the elaborate tile floor details. The building was comfortable and beautiful.

Vance noted that the lobby where we were standing was the space where customers would have retrieved their mail, so in a nod to the structure’s original purpose, the museum added a restored bank of old metal post office boxes there. Upon opening the boxes now, though, museum visitors won’t find letters and packages, but instead, they will be treated to tiny vignettes reflecting on Brenham’s past. One can only imagine the fun to be had exploring the treasures inside the compartments of that relic.

While history is the name of the game at the new museum, not everything is old school. Vance pointed out that state-of-the-art technology has been added to some of the exhibits to engage modern-day visitors and make the transfer of information easy and interactive. For instance, in one room, there is a jukebox, which at first glance might seem like another nostalgic throwback, but punch in the numbers and letters to hear—not music—but more information about the events and people of the region’s past.

As they contemplated the rich history of Brenham and Washington County and how to present that effectively, Vance said museum planners knew that if they did not capture the stories of all segments of the population, the representation would not be authentic or complete. Organizers didn’t have to look far to find the undertold success story of Louise Ozelle Martin, an African American photographer born in Brenham in 1911. In search of more than her small hometown had to offer, Martin left there to discover her life’s passion, moving first to Houston and later to Chicago to study her craft. The artist would eventually return to the Texas metropolis and open a successful studio, but in 1968, she reached a career pinnacle as the only female African American photojournalist invited to cover the funeral of civil rights leader Martin Luther King, Jr. Though some of the images she took that day appeared in Life magazine and other pieces of her work would find their way to national archives, it is here at the Brenham Heritage Museum where the hometown standout’s story, including her cameras and photographs, are front and center. Shining a light on what Martin achieved during a time when women and minorities struggled to be heard is one of the many accomplishments of this small-town history center.

After many months of planning and hard work, this is the week that the Brenham Heritage Museum will finally take down the “closed for renovation” sign and open to the public. Moving forward, museum hours will be Wednesday through Saturday, 10 a.m. to 4 p.m., with the possibility of an expanded operating schedule in the future. In the meantime, make time for a stop here, and you’ll find yourself marveling at the architecture, taking a trip down memory lane, and learning about the area’s history at Brenham’s newest museum—all within steps of the Central Texas town’s charming historic downtown.